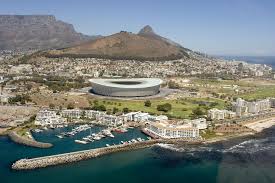 The Cape Town Stadium is a multi-purpose stadium that was opened on December 14, 2009; it is based in Cape Town, South Africa. The stadium was originally built for the World FIFA Cup for 2010, a men’s national soccer/football competition. However, during its intimal planning stages – the stadium was planned to be named the Green Point Stadium, which happened to be the name of the previous stadium before its demolition. Originally, the stadium had a seat compacity of about 64,000 during the world cup game – through after the game, it was reduced to 55,000 seats. Thus, making more room for the field itself.

Before the construction of the Cape Town Stadium, another stadium stood in its place. This stadium was called the Green Point Stadium, and it seated around 18,000 people. The original stadium was a multi-purpose stadium, and it was used as the host to an array of athletic sports, such as rugby and soccer. It was also home to two teams, the Santos Football Club and the Ajax Cape Town during its lifespan. Other than sports, concerts were also held at the large stadium, such as the iconic 4664 concert, which was held in Nelson Mandela honour, for the benefit of sufferers and victims of AIDS/HIV. Since its demolition, the new stadium, Cape Town Stadium, was built and the other portion of the original stadium was used as a part of Green Points Athletics Stadium that features a seating capacity of 4,500.

The overall construction of the Cape Town Stadium took about 33 months to fully complete. The stadium mimics the appearance of a bowl with an open and curved top. At night, the stadium glows brightly and proudly, which just makes the building stand out even more. In total, the stadium cost a total of $600 million to be built in the timespan that it was. However, despite the costs, the stadium itself is one of the marvels of Cape Town due to its closeness to the shore, along with its massive size. Moreover, due to its opening in the top, some artist who performs at this stadium have used floating props from the opening to enhance their overall performance.

Other than hosting the 2010 FIFA World Cup, the stadium does have other usages as well. One of these usages being the host of the Cape Town inaugural games, such as the Cape Town derby between surrounding soccer teams. However, these events are not made to fill up the entire stadium seeing as how they usually only sell about 20,000 tickets per game. Sometimes, rugby matches are held at this stadium as well, the most iconic one being during 2015 where South Africa won the game. Another use is the occasional concerts that take place, some artists that used the stadium are Coldplay, Eminem, Mariah Carey and Justin Bieber.
Other than sports and entertainment, some of the top tier seats were removed and converted into event suites and space for clubrooms. The result saw stadium seating capacity reduced to 55,000. Though the reduction allowed for the stadium to have more space to home hospitality suites, medical training rooms, and banquet halls.

Many groups in South Africa have called for the stadium to be demolished lie its predecessor, due to its decreased usage after the FIFA World Cup. In many cases, the issue has come up several times in current South African politics. However, many think that the stadium is going to stay active as the promotion for its usage has increased over the last year.