Currently referred to as the DHL Newlands Stadium, Newlands Stadium is located in Cape Town and sponsored by DHL, currently, the official sponsor of the Western Province Rugby team the Stormers, since the 1st of January 2011. The value of the sponsorship goes way beyond a financial agreement, the global leader in air freight and international express transport also takes care of employees and value the commitment of the team. 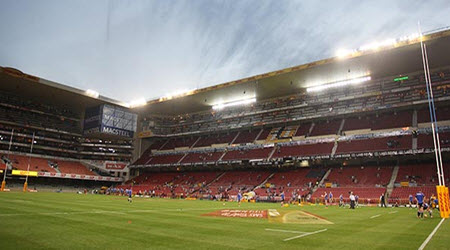 The DHL Newlands Stadium facilitates 51,900 South African fans, although it is not one of the all-seater venues since it is the oldest stadium in the country and the second oldest rugby stadium globally. The stadium is currently home to several sports teams including the Stormers also known as the Western Province during Currie Cup games. The Stormers rugby team finished in first place in the Super Rugby season in 2012 in the team’s history. The stadium is also used for all home games of the Western Province, while it is also used occasionally for soccer matches by the Ajax.

The Western Province Football Union and Rugby Union decided to purchase the stadium grounds in 1888. On the 31st of May 1890, the first official match took place at the Newlands stadium when the Villagers were defeated by Stellenbosch in view of a crowd of 2,400. Only a year later the Newlands Stadium hosted the first international rugby test during the tour of the British Lions.

It took a few years before the stadium offered concrete stands and by 1919 these were completed. The grandstand was erected in 1927 when the field layout was changed, and more changes followed in 1931, which included the extension of the South stand. The South stand as well as a new grandstand was completed in 1950, and the facilities upgrades also included the addition of a Presidential room, an extension to the lower gallery and a fourth by added to the grandstand.

More changes to the stadium followed in the 1970s when it became the headquarters of the South African Rugby Federation, and several of the stands were renovated, while more were also added. In the 1980s a few function rooms and private suites were added to the top stands, and some of the other stands were renovated, while the old South stand was demolished. The stadium in the 1980s also offered another 10,253 seats to fans.

Lots of renovations followed from 1990 to 1995 in anticipation of the 1995 World Cup, when Newlands was used for the opening match of the international event. The name of the stadium changed a few times due to sponsorships, in 1996 it was the Norwich Park Newlands, by 2000 the Fedsure Park Newlands and due to a merger, it was known as the Fedsure and Norwich Park Newlands stadium for some time. By 2002 it became the Investec Stadium and by 2005 the Vodacom Newlands Stadium, by 2011 it became the DHL Newlands Stadium.