Mbombela Stadium is situated in the city of Mbombela, which is the capital in the Mpumalanga province, selected to host the 2010 FIFA World Cup. It is multi-purpose sports stadium seating 43,500 sports enthusiasts. 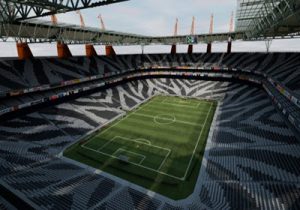 The Mbombela Stadium features 18 giraffe columns supporting its roof while the seating painted in black and white zebra skin adds to the friendly vibrant atmosphere. The stadium also offers 4,500 parking’s, categorized as service provider parking, media parking, disabled, hospitality parking, suite holder parking and VIP parking. It is located west of Mpumalanga and shares a name given to Nelspruit in 2009.

The stadium built in time for the June kick-off of the World Cup and built via taxpayer funding to the value of R1,050million. Construction started at the beginning of 2007 and the stadium design is inspired by the close by tourist attraction, the Kruger National Park. Its signature feature is the roof supports that closely resembles giraffes. The bowl designed seating aims to provide everyone with a seat as close as possible to the field and this venue was the most compact arena during the World Cup. An area of 22.500 square meters covered by the 1,450-tonne roof, designed to keep the costs low, while offering undercover seating.

While the stadium was one of few ready ahead of the World Cup allegations of corruption clouded its opening since this project plagued by the murder of three individuals all connected to the allegations of awarding the construction contract to a rogue company. Council Speaker Jimmy Mohlala was a vocal critic of the province corruption for some time and in late 2008 took legal steps to cancel the design contract of the stadium leading to a criminal case against Bobby Motaung, the soccer boss at the time. Motaung obtained a 1 million rand overdraft from the bank by forging the council’s letter and in 2009 Mohlala paid with his life, when he was brutally murdered just outside his residence.

It seems that the stadium is now used once a year for the Mpumalanga Show since and maybe some odd sports events. Both the New York Times and other international newspaper reported that the 43,500-seater is nothing but a white elephant after the World Cup. The only soccer team in the province is a single provincial team. Even though the stadium offers an auditorium that easily holds 160 people there is no need for it in such a small area. The population in Nelspruit now called Mbombela City is only 110,159 and most are farmers. Still, there is staff managing the facility on a daily basis, including a general office manager, marketing manager and a general manager as well as maintenance staff.