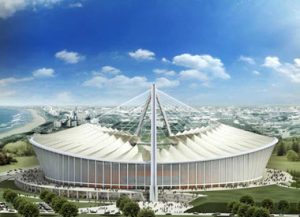 The Moses Mabhida Stadium is a recently developed multi-purpose stadium which is located in the city of Durban in South Africa. It was first opened in November of 2009 and hosted its first match during the same month. One of the most famed games that were hosted at the stadium was for the FIFA World in 2010Cup, which the stadium was nearly filled to max capacity, which is 56,000. The Moses Mabhida Stadium is in the same area of the Kings Park Stadium and the Durban Street Circuit, which is commonly used for motorsports. Recently, in an online pool, the stadium was voted to be the most popular in South Africa.

The South African Communist Party named the stadium after its past secretary. The Moses Mabhida Stadium was built in his honour due to his dedication to creating a democratic party in South Africa as well as erasing some of the racial tension that was commonly seen. The stadium is considered to be one of the newer ones as it first started construction in July of 2006. In the following months, which turned into years, the stadium was worked on until it was finally finished in the fall of 2009. What makes the stadium stand out so much is its design which is centred towards the message of victory and success.

One defining feature is the Arch of Triumph which is one of the first notable features of the stadium. It takes the shape of a “Y”, which has been said to have been inspired by the South African flag – which fans and the teams that are playing can pass through. Additionally, the shape and style of the stadium allow it to be perfect for an array of sports outside of football, which has lead to an increased amount of tourism for South Africa. The Moses Mabhida Stadium has several different levels which all are supported by the plethora of columns which adds to the design.

Outside of the visual aspects of the design. The stadium is known for having 120 luxury suites and business clubs for high-ranking individuals, which provides a total of 7,000 seats for VIP members to watch the game in style. Finally, one its most incredible design features is that the grand arch is not just purely for visual enjoyment, it has a SkyCar which allows visitors to ride to the top and get one of the most breathtaking views of the grounds of the stadium as well as the surrounding area. Even the seating was taken into consideration as they were coloured with the idea of having the seats look like the ocean if one was to spin around the centre of the stadium.

The Moses Mabhida Stadium has been used for several sports as well as other events. Other than hosting football, the stadium has been used for golf practice, bungee jumping, cricket matches, motorsports, rugby union, as well as concerts. Originally, the stadium was planned to be used for the 2022 Commonwealth Games to host the opening ceremony as well as a few of the events. Although this was revoked due to funding issues with the committee for the Commonwealth Games. Currently, there are no upcoming games which have been scheduled by the stadium.