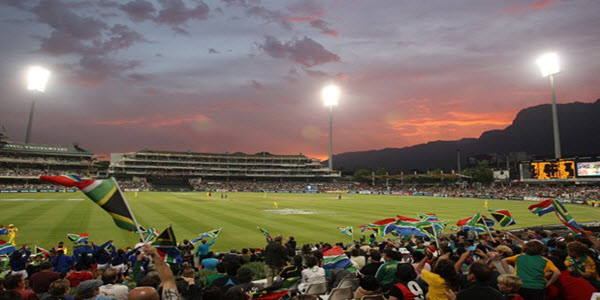 he Cricketer Magazine published a worldwide survey of the best cricket grounds around the world in which 40 cricket experts agreed that the Sahara Park Newland in South Africa was second only to the Lords in London. For the Western Province Cricket Association, this was a hugely important endorsement and it holds special meaning for South African cricket and all Capetonians.

Since the very first match in 1889 was played at Sahara Park has grown into a world-class facility that could host the One Day World Cup in 2003, the IPL games and the T20 World Cup in 2009. Sahara Park Newlands has since played host to several international teams and offers beautiful conference facilities.

Currently, Sahara Park Newlands is reckoned by players to be the most scenic cricket venue worldwide, based in Cape Town it is surrounded by mountains and lots of trees. It was one of the main venues during the Cricket World Cup in 2003 and hosted the opening ceremony, several matches and currently, it is home to the Cape Cobras. It is often confused with Newlands Stadium which is the Western Cape’s football and rugby venue.

Sahara Park Newlands has a 25,000 capacity and offers visitors easy access to food stands and bars. Established in 1888 after the title deed for the land was originally granted to a brewer in 1845, who gave it to his daughter as a wedding gift in 1845. The land heavily wooded at the time was rented in 1887 to the Western Province Cricket Club at a cost of £50 and in 1888 when a new rental agreement was signed for the next 25 years the rent increased to £100. Every club member had to contribute £25 towards the cost and for the construction of the pavilion, a further £350 was received via donations.

Just before a two-day match became the official game to open the grounds, it was levelled in preparation of the game between Colonial Born and the Western Province Cricket Club. The Australians were to arrive in 1902 and the biggest crowd arrive to attend the test, which totalled 10,000. Between 1991 up to 1997 numerous upgrades and changes took place and with more pavilions, seating for 25,000 was added.

Writer and poet, Alan Ross attended the 1957 test, he described Sahara Park Newlands as the most beautiful test ground, separated from the ocean by Table Mountain. Cricketer, Mark Nicholas says nothing in the world is like playing at Newlands, the colour of the Cape Town sky is like no other, it’s a blue you need to experience to believe, it makes players appear like if in a fairytale below it.