Located in Durban, South Africa the Kings Park Stadium was built to accommodate crowds or around 12,000, and it first opened in 1958. By 1980 it received extensive renovations, which it needed again just before the Rugby World Cup in 1995, these also included expansion of its capacity. Currently, the Kings Park stadium can seat a crowd of 52,000. 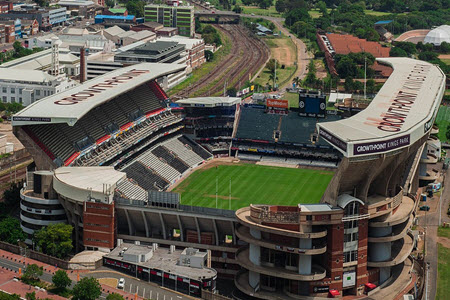 Kings Park was one of the stadiums used as a venue for the Rugby World Cup that took place in South Africa in 1995. Three pool b games were hosted by the stadium as well as one of the quarter games in which Ireland was defeated by France 36-12. The semi-final was also hosted by Kings Park in June 1995, where South Africa’s Springbok team enjoyed a 19-15 win over France, which was the start of what would end in the nations very first Rugby World Cup Trophy.

Apart from being the home of the Sharks rugby team, Kings Park Stadium was also used for a variety of events featuring international stars. It was at Kings Park where thousands of South Africans could enjoy “The Bodyguard World Tour” of Whitney Houston on the 8th of November 1994. Almost a year later the “These Days Tour” of Bon Jovi was hosted at the same stadium on the 3rd of December 1995. Tina Turner performed at the stadium in April 1996 during her “Wildest Dreams Tour’, and in 1997 it hosted the “Evolution World Tour” of Gloria Estefan.

Kings Park was also one of the stadiums where Michael Jackson performed during his History Tour in 1997, followed by his sister Janet Jackson in November 1998 during the Velvet Rope Tour. In 2006 the stadium hosted both the Metallica, Escape from Studio 06 and the Robbie Wessels, Close Encounters tours. The last two tours hosted by the Kings Park stadium was Celine Dion during her Taking Chances Tour and Rod Steward during his South Africa Tour, both in 2008.